João Batista Trajano dos Santos, mentor and owner of the famous brand JB. Master in the art of making musical instruments, his brand is already known and respected in the demanding national and even international market.

Born in 1954 in the city of Caaporã, 50 km from João Pessoa, in 1974 he came to São Paulo where he worked at the Giannini factory, staying for 15 years. He worked in parallel at the factory and at home, later opting for self-employment, coming out of the factory.

Its raw materials come from the United States, Canada, Germany, Japan, India, among others. Among the materials used, the preferred ones are the classic ones such as Jacarandá da Bahia, European Fir and Indian Ebony, technically acclimatized and considered the best in the world.

He has already had the privilege of exporting his products to Germany, the United States, Japan, Portugal, Peru, Africa, Italy and England, being known in the four corners of the world. 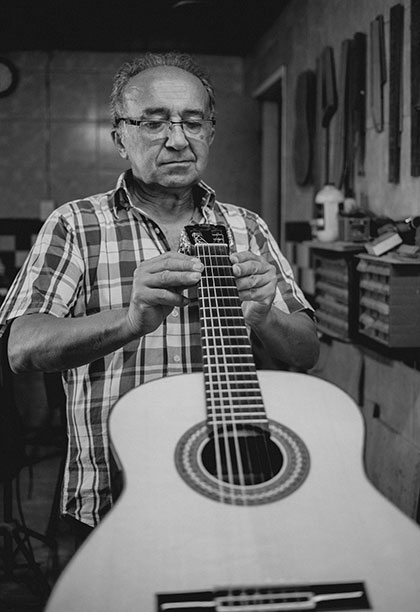 My name is João Batista, owner of JB Instruments. I am a handmade builder of acoustic and electroacoustic instruments, a profession known as Luthier. The main objective of the company is to build customized and high quality instruments, on demand, serving the most demanding customers and in the various segments of music.